----- Original Message -----
From: Ken Shock
To:
Sent: Thursday, April 24, 2008 3:36 AM
Subject: Europe Turns Back to Coal, Raising Climate Fears
People have to live - the Greens cut them off from Nuclear - and this is the consequence. Read this article carefully, this is the NY Times. CO2 is called a pollutant and a primary greenhouse gas - neither is TRUE. Russia and the Middle East had EU over a barrel on oil and gas, so they are changing their game plan in the name of security and economics - smart move ........ Ken

Amazing:
"And Italy is not alone in its return to coal. Driven by rising demand, record high oil and natural gas prices, concerns over energy security and ****an aversion to nuclear energy****, European countries are expected to put into operation about 50 coal-fired plants over the next five years, plants that will be in use for the next five decades. "
From the NY Times--
https://www.nytimes.com/2008/04/23/world/europe/23coal.html?ex=1209614400&en=526abf11808a08ed&ei=5070&emc=eta1 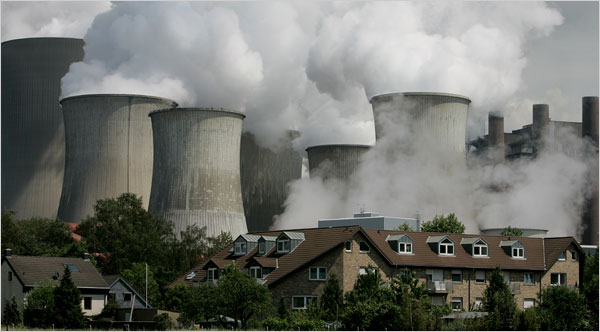 About 50 coal-fired power plants, like the one in Bergheim, Germany, are scheduled to begin operating in Europe in the next five years.

CIVITAVECCHIA, Italy — At a time when the world's top climate experts agree that carbon emissions must be rapidly reduced to hold down global warming, Italy's major electricity producer, Enel, is converting its massive power plant here from oil to coal, generally the dirtiest fuel on earth.

Skip to next paragraph
Enlarge This Image

Italy's Civitavecchia power plant is converting from oil to coal.

A view inside one of the domes of the coal-fired power plant in Civitavecchia, Italy, scheduled to open in two months.

Over the next five years, Italy will increase its reliance on coal to 33 percent from 14 percent. Power generated by Enel from coal will rise to 50 percent.

And Italy is not alone in its return to coal. Driven by rising demand, record high oil and natural gas prices, concerns over energy security and an aversion to nuclear energy, European countries are expected to put into operation about 50 coal-fired plants over the next five years, plants that will be in use for the next five decades.

In the United States, fewer new coal plants are likely to begin operations, in part because it is becoming harder to get regulatory permits and in part because nuclear power remains an alternative. Of 151 proposals in early 2007, more than 60 had been dropped by the year's end, many blocked by state governments. Dozens of other are stuck in court challenges.

The fast-expanding developing economies of India and China, where coal remains a major fuel source for more than two billion people, have long been regarded as among the biggest challenges to reducing carbon emissions. But the return now to coal even in eco-conscious Europe is sowing real alarm among environmentalists who warn that it is setting the world on a disastrous trajectory that will make controlling global warming impossible.

They are aghast at the renaissance of coal, a fuel more commonly associated with the sooty factories of Dickens novels, and one that was on its way out just a decade ago.

There have been protests here in Civitavecchia, at a new coal plant in Germany, and at one in the Czech Republic, as well as at the Kingsnorth power station in Kent, which is slated to become Britain's first new coal-fired plant in more than a decade.

Europe's power station owners emphasize that they are making the new coal plants as clean as possible. But critics say that "clean coal" is a pipe dream, an oxymoron in terms of the carbon emissions that count most toward climate change. They call the building spurt shortsighted.

"Building new coal-fired power plants is ill conceived," said James E. Hansen, a leading climatologist at the NASA Goddard Institute for Space Studies. "Given our knowledge about what needs to be done to stabilize climate, this plan is like barging into a war without having a plan for how it should be conducted, even though information is available.

"We need a moratorium on coal now," he added, "with phase-out of existing plants over the next two decades."

Enel and many other electricity companies say they have little choice but to build coal plants to replace aging infrastructure, particularly in countries like Italy and Germany that have banned the building of nuclear power plants. Fuel costs have risen 151 percent since 1996, and Italians pay the highest electricity costs in Europe.

In terms of cost and energy security, coal has all the advantages, its proponents argue. Coal reserves will last for 200 years, rather than 50 years for gas and oil. Coal is relatively cheap compared with oil and natural gas, although coal prices have tripled in the past few years. More important, hundreds of countries export coal — there is not a coal cartel — so there is more room to negotiate prices.

"In order to get over oil, which is getting more and more expensive, our plan is to convert all oil plants to coal using clean-coal technologies," said Gianfilippo Mancini, Enel's chief of generation and energy management. "This will be the cleanest coal plant in Europe. We are hoping to prove that it will be possible to make sustainable and environmentally friendly use of coal."

"Clean coal" is a term coined by the industry decades ago, referring to its efforts to reduce local pollution. Using new technology, clean coal plants sharply reduced the number of sooty particles spewed into the air, as well as gases like sulfur dioxide and nitrous oxide. The technology has minimal effect on carbon emissions.

In fact, the technology that the industry is counting on to reduce the carbon dioxide emissions that add to global warning — carbon capture and storage — is not now commercially available. No one knows if it is feasible on a large, cost-effective scale.

The Struggle to Be Green

The task — in which carbon emissions are pumped into underground reservoirs rather than released — is challenging for any fuel source, but particularly so for coal, which produces more carbon dioxide than oil or natural gas.

Under optimal current conditions, coal produces more than twice as much carbon dioxide per unit of electricity as natural gas, the second most common fuel used for electricity generation, according to the Electric Power Research Institute. In the developing world, where even new coal plants use lower grade coal and less efficient machinery, the equation is even worse.

Without carbon capture and storage, coal cannot be green. But solving that problem will take global coordination and billions of dollars in investment, which no one country or company seems inclined to spend, said Jeffrey D. Sachs, director of the Earth Institute at Columbia University.

"Figuring out carbon capture is really critical — it may not work in the end — and if it is not viable, the situation, with respect to climate change, is far more dire," Mr. Sachs said.

There are a few dozen small demonstration projects in Europe and in the United States, most in the early stages. But progress has not been promising.

At the end of January, the Bush administration canceled what was previously by far the United States' biggest carbon-capture demonstration project, at a coal-fired plant in Illinois, because of huge cost overruns. The costs of the project, undertaken in 2003 with a budget of $950 million, had spiraled to $1.5 billion this year, and it was far from complete.

The European Union had pledged to develop 12 pilot carbon-capture projects for Europe, but says that is not enough.

Many have likened carbon capture's road from the demonstration lab to a safe, cheap, available reality as a challenge equivalent to putting a man on the moon. Norway, which is investing heavily to test the technology, calls carbon capture its "moon landing."

It may be even harder than that. It is a moon landing that must be replicated daily at thousands of coal plants in hundreds of countries — many of them poor. There is a new coal-fired plant going up in India or China almost every week, and most of those are not constructed in a way that is amenable to carbon capture, even if it were developed.

Plants that could someday be adapted to carbon capture cost 10 to 20 percent more to build, and only a handful exist today. For most coal power plants the costs of converting would be "phenomenal," concluded a report by the United States Environmental Protection Agency.

Then there is the problem of storing the carbon dioxide, which is at some level an inherently local issue. Geologists have to determine if there is a suitable underground site, calculate how much carbon dioxide it can hold and then equip it in a way that prevents leaks and ensures safety. A large leak of underground carbon dioxide could be as dangerous as a leak of nuclear fuel, critics say.

As for its plant here, Enel says it will start experimenting with carbon-capture technology in 2015, in the hopes of "a solution" by 2020.

In the meantime, it and other new coal plants will be spewing more greenhouse gas emissions into the atmosphere than ever before, meaning that current climate predictions — dire as they are — may still be "too optimistic," Mr. Sachs said. "They assume the old energy mix, even though coal will be a larger and larger part."

On many other fronts, the new Enel plant is a model of efficiency and recycling. The nitrous oxide is chemically altered to generate ammonia, which is then sold. The resulting coal ash and gypsum are sold to the cement industry.

An on-site desalination plant means that the operation generates its own water for cooling. Even the heated water that comes out of the plant is not wasted: it heats a fish farm, one of Italy's largest.

But Enel's plan to deal with the new plant's carbon emissions consists mostly of a map of Italy with several huge white ovals superimposed — subterranean cavities where carbon dioxide potentially could be stored.

The sites have not been fully studied by geologists as yet to make sure they are safe storage sites and well sealed. There is no infrastructure or equipment that could move carbon into them.

The new Enel plant here opens its first boiler in two months. It will immediately produce fewer carbon emissions than the ancient oil boiler it replaces, but only because it will produce less electricity, officials here admit.

In the towns surrounding Civitavecchia, the impending arrival of a huge coal plant, with its three silvery domes, is being greeted with a hefty dose of dread.

"They call it clean coal because they use some filters, but it is really nonsense," said Marza Marzioli of the No Coal citizens group in the nearby ancient Etruscan town of Tarquinia. "If you compare it to old plants, yes it's better, but it's not 'clean' in any way."

The group says that Enel has won approval for a dangerous new coal plant by buying machines for a local hospital and by carrying out a public relations campaign. Enel advertisements for the project show a young girl erasing a plant's smokestack.

Most people who took part in a 2007 local referendum voted no, but the plant went ahead anyway, the group said.

The European Union, through its emissions trading scheme, has tried to make power plants consider the costs of carbon, forcing them to buy "permits" for emissions. But with the price of oil so high, coal is far cheaper, even with the cost of permits to pollute factored in, Enel has calculated.

Stephan Singer, who runs the European energy and climate office of WWF, formerly the World Wildlife Fund, in Brussels, said that math was shortsighted: the cost of coal and permits will almost certainly rise over the next decade.

"If they want coal to be part of the energy solution, they have to show us that carbon capture can be done now, that they can really reduce emissions" to an acceptable level, Mr. Singer said.